Rino Zueck and Gemma Angeli Zueck married on February 23, 1963 in Santa Cruz. They celebrated their 50th wedding anniversary in Santa Cruz surrounded by family and friends. They received a special blessing from Father Albert Mengon from our club. Gemma was born in 1934 and raised in Cloz, Val di Non along with 6 brothers and sisters. Rino was born 10 months later in the adjacent village of Brez. In 1950 Rino’s family immigrated to Colorado. After a stint in the Air Force, Rino relocated to Santa Cruz to be near his sister Elena and his Prevedelli cousins in Watsonville. Gemma arrived on December 23, 1962, and they married exactly three months later. The couple had two children, Roseanne and John. Rino worked for San Lorenzo Lumber for over 40 years. 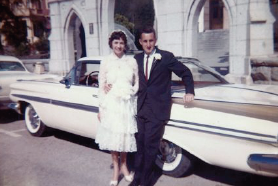 After many treasured years raising their own children, they have been blessed with three grandchildren – Elizabeth, Joshua, and Christopher.
Congratulations to Rino and Gemma on reaching this milestone!

Please see the new fundraising effort by Vincenzo Mancuso to continue working on Trentini Americani, a memory project that features the immigration experience of Trentini in the United States.

Trentini Americani is a collection of interviews started in 2009 and ended in 2018. The project was produced by the Historical Museum of Trentino, which allowed the collection of over 160 interviews: an extremely valuable memory bank.
The project is proceeding very slowly and it has been suspended several times. There are no more funds available from the Museum, and there are no regional or state funds accessible at the moment. The situation worsened because of the Coronavirus, which hit Italy particularly hard.

Direct help from the Trentino community would be the only solution to complete the film. Trentini Americani: please help Vincenzo to finish this project. This film is about your history, your memory, and your families. The minimum budget necessary to complete the film production is $9000.

We invite you to make a donation – no matter the amount.
To all the organizations that will be able to donate at least $1000, Vincenzo guarantees the film presentation and screening at their premises starting in the Fall of 2021. Corporate sponsorships will also be appreciated. Companies logos will be shown in the end credits. All supporters will receive the link to the film streaming.

Thank you in advance! Grazie in anticipo!

The direct link to the fundraising campaign is www.italoamericani.org/support.html ... See MoreSee Less

From the Associazione Trentini nel Mondo

Almost 2 months have passed since on 10th March Trentini nel mondo closed its office in Trento due to the medical emergency caused by Coronavirus. It is been a rough couple of months for anybody, both for individual and for the association.

We thank you for the support and affection you showed us through phone calls, messages and encouragement videos with yours photos.

From 4th May we could come back to the office, with a lot of limitations and precautions but with such determination.
Now we have a new challenge. Unfortunately we were obliged to cancel almost all the initiatives for this year, we are really sorry but we couldn’t do differently. In the next weeks the office and the executive of the association will be working on preparing a new activities planning for the second part of the year. It will be an important effort of creativity and optimism and we will try to do it together with you, members, Trentino Clubs and friends.

Thank you again and we really hope to restart soon with a new enthusiasm in Italy and all over the world.

The secretary is active through phone and email. Only staff can enter the office. If necessary you can contact the association:
Phone 0461234379
Email info@trentininelmondo.it
Fax 0461230840
Website www.trentininelmondo.it
Office timetable
morning Monday-Friday 9.00-12.00
afternoon Tuesday-Friday 14.30-17.00 ... See MoreSee Less

Circolo Trentino di San Francisco was founded on February 9, 1980 during a visit to the Bay Area by Dr. Bruno Fronza on behalf of the Trentini nel Mondo Association. The first president was Vittorio Eccher, the first vice-president was Laura Floriani Vitlacil, and our current president, Giuseppina Piasente Alvarez, was secretary. From the initial group of 30, the roster has grown to around 200! We plan a proper celebration once the quarantine in California has been relaxed.

We thank board member A. Amigassi for creating this elegant 40th anniversary logo, inspired by the green valleys of Trentino and the blue oceans of California. ... See MoreSee Less

Enjoy the Corale Polifonica and Orchestra from the University of Trento :) ... See MoreSee Less

Here are current statistics on the number of cases in Trentino broken down by municipality: