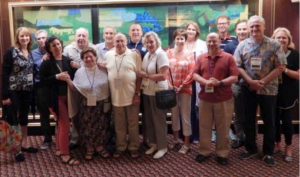 In August the Trentino Club of Southern California hosted the biennial ITTONA (International Tyrolean Trentino Organization of North America) convention aboard a cruise from LA to Ensenada, Mexico. It included a tour in Baja California of the prestigious Cetto Winery, founded in 1928 by Angelo Cetto from Levico Terme in the Valsugana. Francesco Bocchetti, Vice Director of the Trentino nel Mondo Association, gave a captivating presentation highlighting the history of the Association and the role it has played in supporting the Trentino diaspora.
The US has 21 Trentino clubs and Canada 5, and there were representatives from several of these clubs in attendance. A big thank you goes out to the Southern California Club and to ITTONA secretary Anna Vann who worked tirelessly to put on this event. Grazie Anna!!

Classes are reserved for abroad descendants of Trentino emigrants and are provided by ICoN (Italian Culture on the Net). The application must be presented to Associazione Trentini nel mondo by June 28th 2021.

The cost is covered by the Associazione Trentini nel Mondo.

Happy 87th to dear Laura Floriani Vitlacil - founding member of the Circolo back 41 years ago.

She was also our first vice-president and longtime treasurer.

Two years ago we celebrated her 85th at Terun Pizzeria in Palo Alto.In the photos with our president Giuseppina both born in Trentino in 1934.

Dear Trentini,
As you know, last year was the 40th anniversary of our club.
Due to the pandemic we were unable to celebrate this milestone so the club decided to have an outdoor celebration this year, on Saturday, October 23rd at Prie Winery in Lodi www.priewinery.com.

Lodi is a bit of a distance for some, but we hope you’ll join us nonetheless. With pandemic concerns in mind, we chose an outdoor venue. So, please mark your calendars for October 23rd. We’ll provide more details as we get closer to the event. ... See MoreSee Less

Prie Winery is a small winery located on the east side of Lodi CA. We specialize in creating wines from vineyards of Northern California.
View on Facebook
·Share

I'm Francesco Piazzola, a 21 years old student who is looking for any kind of job for the summer in the USA. I currently live in Madonna di Campiglio, a small town in Trentino and it would be fine to relocate. I'm a business major.
I would appreciate it if you could spread the word among any Trentino who is looking for help with their business.
Thank you for your time and consideration.
Francesco