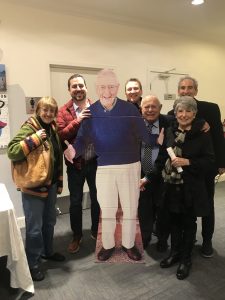 Irvin Parolari, aka Irv, passed away November 28, 2018. Irv’s paternal grandfather, Eligio Parolari, was from Seo, which is now part of Stenico, and his paternal grandmother, Augusta Aloisi, was from Desindo, now part of Comano Terme. Both towns are in the Valli Giudicarie. Irv’s mother was from Pistoia in Tuscany. Irv’s grandparents immigrated to Pennsylvania, as did so many other Trentini. Irv was vice-president of the club when we hosted the 2004 ITTONA Convention, a gathering of North American Trentini. He played an instrumental role in putting on that event. Irv’s ever-present smile will be missed by all.

In the picture: Irv was quite gregarious and was his church’s official greeter. At the funeral a full life replica of Irv greeted those who arrived. From left to right, the late Ester Bugna, Luca Angeli, Luca Dorigatti, Ralph & Rosie Yob, Dan Aspromonte

Below is the obituary: 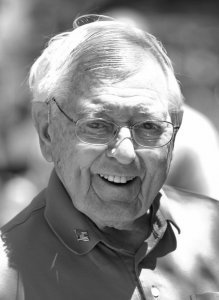 Born February 2, 1928 on Groundhog’s Day in the small town of Brockway, Pennsylvania to Guido and Susan Parolari. My dad was raised on the farm of his grandparents and enjoyed the life of the farm, having a horse and running free.

During the depression my dad and his parents moved to Buffalo, New York (the BIG CITY!) for better job opportunities. My dad did not adjust well to the big city or to school and this is where he started to develop his humor. He became the class clown! His sense of humor continued throughout his life until the day before his passing.

In 1948 he joined the Navy on the ship “Valley Forge” and went off to help fight the Korean war. He never did see battle but forged some of his best, long-term friendships.

Friendships and family were very important to him and he went out of his way to call, email and maintain those relationships.

My dad and mom, Reva, married April 28, 1956 and had 4 children; Susan, Stephen, Diana and Debra. He is survived by his wife Reva and his two daughters Susan and Debra, son-in-law Gilles, two grandkids Kayla and Alek, and his brother Bill, wife Sylvia.

He was very proud of his two grandchildren Kayla and Alek. He adored Kayla and she was always his “little kewpie doll” with her award-winning smile and personality but Alek was his playmate and they always enjoyed joking around, playing basketball and sharing Alek’s newest creation of the day.

He would always say that the highlight of his life was receiving Jesus Christ as his Lord and Savior. He practiced his faith on a daily basis and “walked his talk”.

My dad was a larger-than-life force in the world and he will leave an empty space in the life of his family and friends but will never be forgotten. He passed peacefully on November 28th to be with his Lord and Savior.

We love you DADDIO!

The Campana dei Caduti Foundation of Rovereto is changing its logo.

What will the Foundation's new symbol be?

You can help to decide! Go to:
www.fondazioneoperacampana.it/en/vote
to cast your vote.

You can vote for the new logo below. Voting will end on 30 September 2021 at 11.59 p.m. and we will unveil the winning logo on 4 October 2021, the 96th anniversary of the first tolling of Maria Dolens...
View on Facebook
·Share

5th Gold at the Tokyo Olympics - Trentino Ruggero Tita of Civezzano in sailing with crew member Caterina Banti of Rome.

Armando Maistri was voted unanimously the new president of the Trentini nel Mondo Association. He replaces Alberto Tafner who decided to step down after 12 years at the helm of the Association.

There is more information in the link: www.trentininelmondo.it/slider/201-armando-maistri-e-il-nuovo-presidente-della-trentini-nel-mondo... ... See MoreSee Less